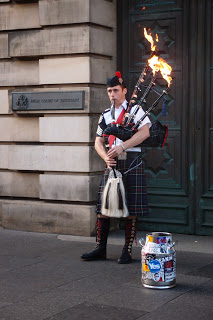 I promised myself that I should write down my thoughts on the Scottish Independence Referendum before it actually happens on the 18th September 2014. It certainly has been a roller coaster ride of thoughts and only now a few days before the referendum my ideas have settled on a somewhat firm decision. When the referendum was announced I started off with no idea. After a while and some reading I was reasonably firmly in the no camp to the extent that I had a passionate discussion with a colleague about why no is sensible. Some more thoughts and I am in the yes camp.

I am German but I have made Scotland my home. I am very happy here in Edinburgh, a very international and multicultural place. My wife is Scottish, my kids are bilingual. They go to a school where about half the kids are multilingual too. I found Scotland very welcoming and tolerant. So my experience is that the desire for independence is not due to nationalistic feelings but a desire to shake up the current UK political establishment. In fact my personal viewpoint is that of an internationalist.

I think the difficulty with deciding which way to vote is because there is no way of making a rational choice. We cannot know what will happen in the future. I also think that both campaigns have been very selective with their messages. I did notice, however, that the no campaign is very negative about the future of an independent Scotland (perhaps it has to be). It is also very much stuck in the past - the UK used to be an empire which won various wars in the past (and don't get me wrong I am glad that Germany lost the second world war and had a chance to shed some of the entrenched traditions and outlooks and start anew). I think the Orange Order March in Edinburgh demonstrates this yearning for the past quite nicely. The yes camp is naturally a lot more positive about the future. It is probably far too optimistic about what can be done.

So my thoughts on the economy:

EU membership might seem like a contradiction to the desire to be independent. I don't think so. The Scottish Independence is not a nationalistic movement. I think it is about correcting the neo-liberal course firmly pursued by the various UK governments of the past 30 years or so. Being German, I am very much in favour of a federation. Some powers should be devolved to local entities whilst other powers should be devolved to larger, overarching entities. This could obviously include a UK state. However, I fail to see that the UK establishment has the capacity to change direction and enter a serious constitutional debate. Current talk about the UK considering leaving the EU are obviously worrying as well. It would be a great disaster to the UK (and Europe) should they leave the EU. The recent uproar about limiting the power usage of vacuum cleaners is very telling - we do want more efficient gadgets whatever they might be and it takes regulation to make these changes happen.

The initial thought that moved me from a tentative no to a tentative yes was that an independent Scotland would have a much smaller armed force and could not afford to take part in any foreign military adventures. I do not want to support military actions based on blatant lies (remember the 40min weapons of mass destruction?). Trident might not move from the Clyde straight away - maybe it will never move but the (r)UK may decide to just not renew their nuclear capabilities and decommission it.

The no campaign threatens economic disaster and Scotland being left undefended should Scotland become independent. Frankly, when I think about the future my view of it is not very positive to start with. I strongly think that we will need to seriously change the way we live. Wars over resources in the Middle East, civil unrest in the US, youth unemployment in Southern Europe, migrants fleeing Africa in the hope for a better life in Europe and looming climate chaos all suggest we need to change or suffer the consequences. On top of that we have a relentless industrial revolution were it is not clear that humans are the winners.

So, I think I will vote YES, because

Finally, in any case, it is amazing how everyone talks about the referendum, in the streets, at the bus stop, at work. I think it does show that people have not lost interest in politics. However, it does suggest that people are fed up with mainstream politics. We shall see what will happen on Thursday. The one thing I truly hope is that participation will be huge.