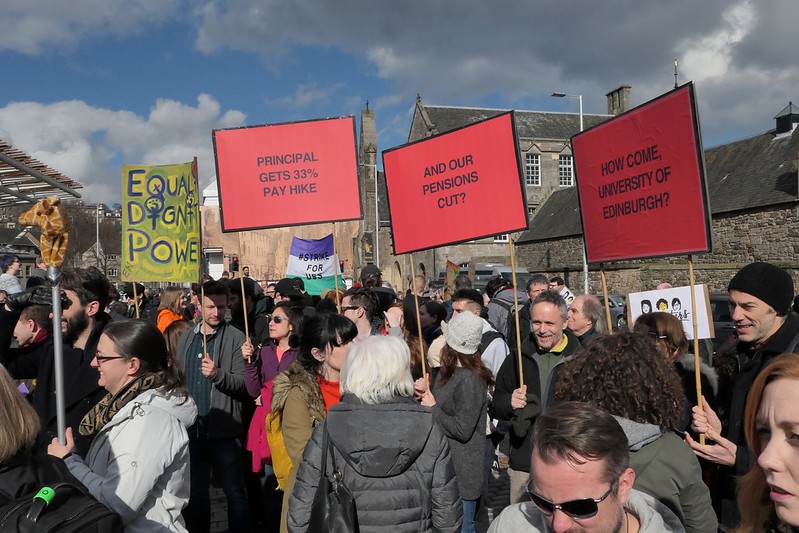 We are now halfway through the 14 day strike over changes to our pension scheme. A further 14 days of strike are on the table depending on the progress of the negotiations between the union, the employers and the pension fund. At the centre of the dispute are different views on what the world will be like in 20 years. The employers UUK and the pension fund USS see a deficit in the future. They anticipate this deficit due to a number of assumptions: above inflation salary rises, steady increase of life expectancy and, most crucially, they prepare for the worst-case scenario of a sectorial collapse which would require the unwinding of the entire scheme. The union UCU contests these assumptions. The details of these assumptions are discussed in great detail elsewhere.

When the union asked us to support industrial action I was very sceptical. My previous experience of UCU strikes over pay was very half-hearted. Some of us went on strike, our pay was docked and our demands were ignored. I assumed this action would be similar. My heart sunk further when I heard that we were asked to strike for 14 days. At home we had big discussions of what to do. Ten years of effective pay cuts due to below-inflation salary rises and austerity and kids that are growing up and getting more expensive has left us in a tight financial situation. A job that used to allow us to live quite comfortably ten years ago now covers the basics but requires us to consider everyday expenses. Major expenses are fairly catastrophic. Yet our household income is well above the median household income. The loss of income due to the strike will hurt. Finally, my crystal ball is particularly dim looking ahead to the time when I might think about retiring in 20 years or so. The way I see it is either our world will be very dismal if we do not sort out the big problems of climate change, automation and rising inequality; or we will have sorted them out and we might well not need pensions as a universal basic income will be available.

In short, I was not convinced by the strike. I was surprised at how strong the support for the strike is. We even managed to picket both our buildings at King's Buildings, the University of Edinburgh Science and Engineering campus which is not known as a hot bed of industrial activism. I am also extremely pleased by the support we are receiving from our students. They are bearing the consequences of the strike by missing lectures and tutorials. My first concern was proven incorrect and although both the financial burden and my view of the future still remain I now fully support the industrial action.

So far, during the strike we have learned a lot about pensions and the assumptions and models that are used to assess their viability. We have also found out about the governance of our universities, their management and the finacialization of higher education. Universities in the UK are strange beasts, sometimes they are seen as public sector organisations and other times as private sector. As a member of staff I see myself as a public sector worker. I hope I contribute to society by helping to educate people to understand both our physical and social environments and by directly contributing to research. Management also sees university as public sector entities when it comes to our remuneration and below inflation pay rises. However, management see universities also as private sector entities when it comes to their remuneration, student fees (which are less of an issue in Scotland although oversee students face huge fees) and our pensions. The rise of zero hour contracts and precarious working conditions also point to a private sector view of the world. It also turns out that university governance and in particular the employer organisation UUK are very opaque.

Having seen the arguments brought forward by both sides, the unity of staff and students and management of many universities breaking rank with the UUK position I wonder how our world works. I am a geophysicist. I have a good understanding of how our physical world works, I have some idea of how our biological environment works but I have no idea of how our society works. I find it deeply irrational. How can the £400k salary of our principal be justified? Why are our pensions attacked using dubious assumptions when there seems to be no need to do so? How can our government, even if they are Tories, push through the hardest of BREXITs? Why are we not dealing with air pollution and the resulting deaths as a matter of urgency? What about climate change and the social implications of automation? Does our society work by the people with influence, money and power trying to get away with as much as possible, shaping our world to their needs and the rest of us forced to struggle against them? This post on narratives gave me a lot to think about.

The world is changing. It must change as continuing as we did in the past is not possible: there cannot be indefinite growth, our resources are limited; climate change is happening; digitalisation and automation is fundamentally changing how we work and most importantly how much human labour is required. This is then a struggle of where these unavoidable changes lead us to. Will the powerful exclusively benefit to the detriment of the majority? Can we come up with an alternative? I think this is exactly what the universities should attempt to do. And we need to start transforming the universities themselves.

Update: The Manifesto for the University of the Future is well worth a read. There is also the Aberdeen Manifesto which strikes a similar vein. This is the sort of thing I have in mind.