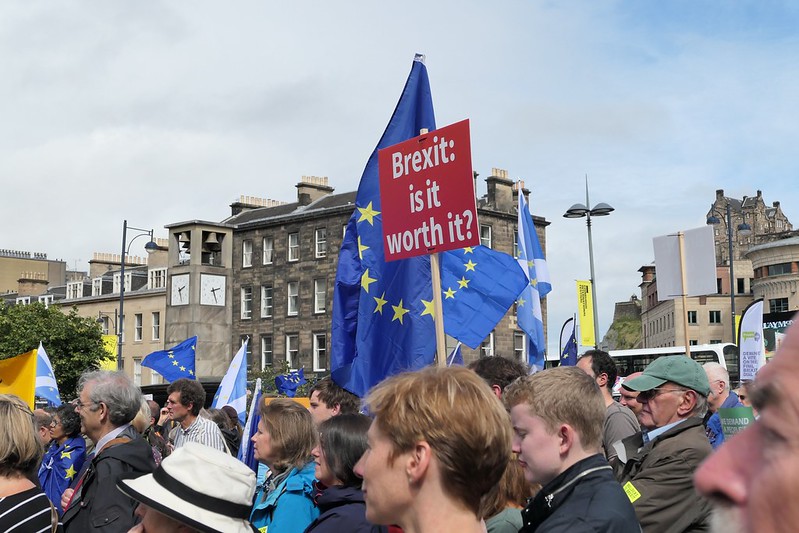 We are still waiting to find out what Brexit might mean. Although, more and more voices from all directions are warning that it is going to be an absolute disaster that will affect everyone in the UK. I went to the People's Vote rally on Saturday in Edinburgh. It was well attended - a thousand people or so. Maybe not as many as I would have hoped for. I enjoyed the speeches even though some of the jokes made me cringe. It was good to feel not alone and hear some other sane voices.

It seems that some people from the Scottish Independence movement have serious issues with the People's Vote movement: Brexit is an English problem; Scotland already voted to remain in the EU; a second EU referendum will divert attention from a second independence referendum; People's Vote is an English movement full of unionists; Brexit will facilitate Scottish independence. I think this is wrong. Yes, Scotland voted against Brexit (62%) as did Northern Ireland (55.8%) while England (53.4%) and Wales (52.5%) voted for Brexit. Yes, there is a massive imbalance in the UK makeup where England ends up outweighing the opinions of Scotland, Northern Ireland and Wales. However, that is also true for London who voted 59.9% to remain with a population larger than Scotland. I do think that the UK needs to be reformed to balance out these regional tensions. I also think that this probably will not happen within the framework of the UK and that Scotland needs to become independent to embrace modern institutions fit for the 21st century (see also my posts on independence).

However, independence is an entirely separate matter from Brexit and the People's Vote. Brexit is on a tight schedule and nothing else will be sorted until Brexit is dealt with next March. This schedule is not entirely due to Westminster invoking Article 50. It also depends on the upcoming elections for the EU parliament in May 2019. The position of the UK will need to be sorted by then. I am still not sure how to vote for Brexit happened. However, it is clear that the official leave campaign lied and broke electoral law. I also think the British press has a huge role to play using the EU as a convenient scapegoat for the last few decades.

Leading figures of the leave campaign are members of the current UK government. And yes, Scotland didn't vote for this government (although the Conservatives won 12 seats in Scotland in addition to their 1 seat they held previously). Scotland is part of the UK. And the Westminster Tory government is trying to figure out what Brexit means and what sort of Brexit should happen. And the Labour opposition seems to be keen on Brexit, too. Somehow they think that Brexit will allow the UK to become a socialist utopia. So Brexit is very much a Scottish problem as well because should Brexit happen Scotland will be dragged along if it wants it or not.

Giving the people of the UK another vote to decide which way Brexit should go when they have the options clearly before them is an obvious way to defuse this situation. If the people (and, yes, it will be mostly the English as they are the biggest group) decide that a no-deal Brexit or a blind Brexit is not desirable it will allow the government to withdraw from the brink of the cliff. On the other hand, I would have thought, that it would be a clear indication for an independent Scotland if the people of England decided that any Brexit should go ahead but Scotland decided it was a bad idea (again). If, however, Scotland decided Brexit should go ahead along with the English then, I am afraid, Scotland would sit in the same (sinking) boat as the rest of the UK.

I think another important aspect of the People's Vote and Indy 2 discussion should be that it would be a lot easier for Scotland to become independent if both Scotland and the rest of the UK were in the EU. The EU facilitates exchange of goods, services and people. This works very well as can be seen by the relationship between the Republic of Ireland and Northern Ireland. The border between iScotland and rUK would look very similar and it would pose no problem as long as both parts are part of the EU. If, however, iScotland wanted to be a member of the EU and rUK was thoroughly brexited then the same issue of a hard border would arise as between the Republic of Ireland and a brexited Northern Ireland currently discussed.

So, I think because of timing and practicalities Scotland and the Indy2 movement should support the People's Vote. Brexit must be stopped as it is totally insane. The People's Vote campaign in Scotland shouldn't be too hard as the Scots don't need to be convinced. Relative numbers mean that Scotland won't come to the rescue of England - the English need to sort out the Brexit mess they created themselves. However, it is in Scotland's interest to avoid Brexit. The case for an independent Scotland remains as strong as ever and as the Brexit episode demonstrates should be pursued with some urgency once Brexit is out of the way.