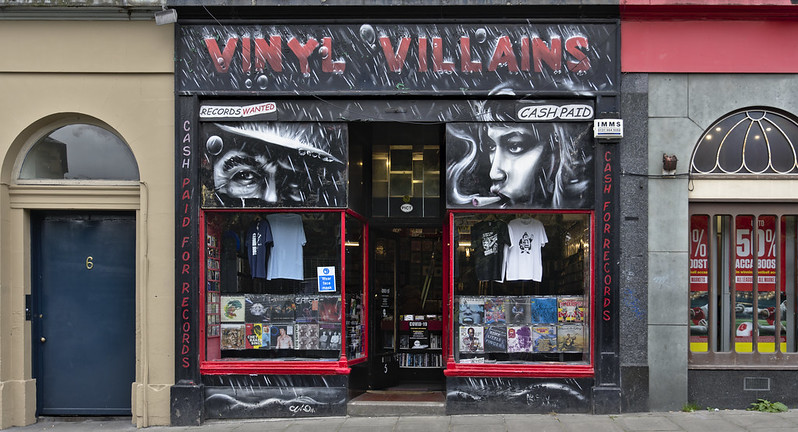 In the small town where I grew up there were essentially two places where you could buy records and CDs. They also sold personal stereos, TVs and washing machines. They had a pretty good selection but nothing unusual. I had to go to the city for a specialist record shop or one of the huge places like WOM (the German equivalent of the megastore) in Stuttgart. In short, there was a variety of places where you could find and listen to music and have a chat. If you really did not like the music they were selling or the people in the shop you went somewhere else.

These days the big music stores have disappeared. I am lucky to have a choice of small record shops which are great to browse but possibly not so good if you are after something specific. Buying music online is surprisingly tricky. There is obviously amazon. I avoid them because of their business practices. Bandcamp is great for bands that use this platform. Otherwise, I tend to buy from the bands directly.

The other option is a streaming service such as spotify. Until recently I had a family account. Mostly because the kids were using it. I do not mind paying for a service if it means that I do not need to listen to adverts. I was well aware of the fact that the artists are poorly remunerated for publishing their work on spotify. I tended to either listen to music I already had or to find new music which I then would go out and buy if I liked it. The recent argument between Neil Young and spotify over a podcaster spreading vaccine misinformation demonstrates that spotify is not a neutral technology platform. It does not merely stream music. It pays the podcaster to exclusively publish material on its platform. Spotify aims to profit from the controversy generated by the podcaster. The controversy is not over a matter of taste such as pop versus thrash metal but over well established understanding of our world. Spotify simply seeks to maximise its profit by selling whatever sells best, including fake information.

In the past there was a choice of shops. And, although each shop had a limited selection, there was a huge variety. Today, there are some big shops remaining and the big internet platforms that offer huge choice but are the same wherever you go. Places become interchangeable as they lose their unique set of shops. Today shopping is just about possessing something rather than discovering it.

Spotify is a very useful service but in the end I really do not need it. I can easily go back to how I listened to music before. It is, however, an example how the large internet corporations, although convenient, are very homogeneous. In the modern world of global internet companies such as spotify, amazon, facebook and google variety is removed. They each produce extremely compelling products and services. If something is not available on the platform it might as well not exist. Because they do offer so many things you end up consuming whatever they provide. The consumer has to either put up with it or try very hard to find alternatives.

The way we consume media is also important. Over the decades, I have collected hundreds of CDs with a total playtime of over a month. I stream the music to various devices in the house and have a copy of it on my phone. Given all this choice how do you select what you want to listen to? At least it was me who selected most of the music. How do you deal me the absolutely vast choice of music on a service like spotify? The algorithm is trying to make suggestions and thus influence your taste. The machine becomes the curator.

These companies gain monopolies that also allow them to gather data on consumer behaviour. The point of these huge data collections is to get the consumer to consume more: you bought x so you might be interested in y. I wonder to what extend these algorithms determine fashion and culture. In the case of spotify I was frequently disappointed when I could not find a particular album and listened to something else instead. In the case of netflix we simply gave up because we felt the films and series are too homogeneous and in many cases far too violent. I am only aware of these shortcomings because I was socialised before these platforms existed. In the end, their hardcore capitalist attitude means that profit trumps everything else.

It is getting increasingly difficult to avoid getting sucked into these platforms. Ditching spotify was easy. I do not miss amazon. I never used any facebook product. I do like twitter. I am still looking for a good video on demand service that offers the full range of films from diverse cultural backgrounds. Degoogling my digital life will be extremely difficult and I suspect I will be only partially successful. This modern and very convenient world actually requires a lot of thought and deliberation if you want to maintain your autonomy and avoid feeding the capitalist beast.

I am looking forward to finding new music by listening to the radio and browsing actual shops. As a minor act of rebellion I went to a shop to buy a Neil Young album and found a Sisters of Mercy album that was missing from my collection.